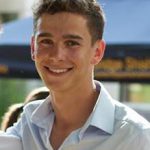 Follow Ben Paxton’s journey into clinical research in his blog and read his five top tips for medical students who are exploring research opportunities. Ben is a medical student at the University of Cambridge.

When it came to choosing a Student Selected Component (SSC) at the start of clinical school in year four, it was hard to know where to start.

I knew very little about clinical research but knew I was interested in public health, had enjoyed intercalating in psychology and that the idea of working in a lab didn’t particularly appeal to me. From that, I contacted a few different supervisors without a very clear idea of what I wanted to do.

I received a rapid reply (always a good sign!) from Katie Mills and Juliet Usher-Smith in the Primary Care Unit and met with them a week later. We got on well and they said they had a potential project I could work on within an on-going pilot study of incorporating personalised information about cancer risk into consultations in general practice (the I-CaPP pilot study), but also that there was flexibility for me to focus on what I found most interesting.

The I-CaPP pilot study was assessing an intervention in which patients were given personalised cancer risk information within primary care consultations, mainly NHS Health Checks, with the aim of promoting behaviour change. My main role was to watch video recordings of the consultations and assess how closely to the researchers’ intentions the intervention was being delivered.

I had never considered primary care research before.

I wasn’t familiar with the topic, but the project was related to public health and I knew I’d have supportive supervisors – so I took up the offer to do my SSC project at the Primary Care Unit.

For this project, I was fortunate to be working in an office with the research group (the Prevention Group led by Professor Simon Griffin), which meant that while watching the videos I had the opportunity to speak with others who were working on the wider project. From these conversations and the work I was doing, I became interested in the NHS Health Check programme, which I discovered is the largest primary prevention initiative in the UK.

In particular, I began to wonder whether the Health Check consultations were being carried out in the way the national programme specifies.

My supervisors encouraged me to analyse this question further, using the data from the I-CaPP project and then to present the preliminary data in a poster at the CUSCRS INSPIRE conference in 2019.

Juliet Usher-Smith then offered to support me in writing up the research, with the aim of trying to publish it. I’d never written an academic paper before, so didn’t know exactly what I was letting myself in for – but it turned out to be harder and take much longer than I was expecting. It wasn’t just the writing itself, but the data analysis, the literature review (if only I’d started using Mendeley from the start!), and responding to comments from supervisors and reviewers.

Having started writing in April 2019, the paper was accepted for publication in March 2020 by the BJGP Open*.

I also had the opportunity to present the paper at the 2020 SAPC South East Conference – which was a pretty daunting but definitely worthwhile experience. I was fortunate to win the Medical Student Prize for my presentation, and the paper was subsequently highly commended in the NIHR School for Primary Care Research George Lewith Medical Student Prize.

I would definitely recommend doing clinical research as a medical student.

I’m incredibly grateful to my supervisors, Juliet Usher-Smith and Katie Mills, for their support in doing my first piece of clinical research and I feel very fortunate to have had this opportunity. I’ve learnt a lot from this project which I hope will be useful to me in my future career, including gaining insight into the process of writing a paper and then responding to critical feedback from supervisors and peer-reviewers. I found this process quite challenging at times, but came to understand it as being important for making the research clinically relevant and making me more self-critical in my work.

Doing this project showed me the amazing opportunity we have within medicine to contribute to clinical research alongside our clinical practice as doctors in the future and I would definitely recommend doing clinical research as a medical student even if, like me at the start of clinical school, you’re not sure it’s for you.

Here are five tips I would give to anyone starting their first piece of clinical research:

Try to find a supportive supervisor

I emailed four supervisors, but only ever received one response – and they turned out to be great, supportive supervisors. I have friends who have had similar experiences, and would say that as a general rule if a potential supervisor isn’t being at all responsive or helpful while you’re trying to organise the project, they’re unlikely to be supportive once you’ve started.

Don’t worry about finding the perfect research project or speciality

I’d never considered primary care research before and I think it’s rare for anyone to find a project which is a perfect fit. But I found that doing something in a field which broadly interests you and with a supervisor you can work well with was a good starting point for choosing my project.

Be clear about your role in the team

I really appreciated being able to join an existing project, and contribute to a larger piece of research, but the downside of this can be less control over what you do. I found it really useful to discuss early on exactly what my supervisors were hoping I would do, and any flexibility I had with this. I would recommend this to set both your expectations and your supervisor’s, as well in helping you to be an effective member of the team and stop you from doing unnecessary work!

Make the most of the opportunity

I’d not considered doing clinical research before my SSC, but I’m very grateful that I was encouraged to take the NHS Health Check element of the work further, present the research at conferences and write it up as a paper.

It’s a long game, but it’s worth it in the end

Alongside developing my own research interests, presenting at conferences, and finally having our paper accepted, there were many hours of re-watching videos of consultations, triple checking I’d put the right formula in my spreadsheet and editing my introduction for a 7th time. But I have really enjoyed getting involved in clinical research, have learnt loads from doing the project and would definitely recommend giving it a go!

Read Ben's blog on the University of Cambridge website